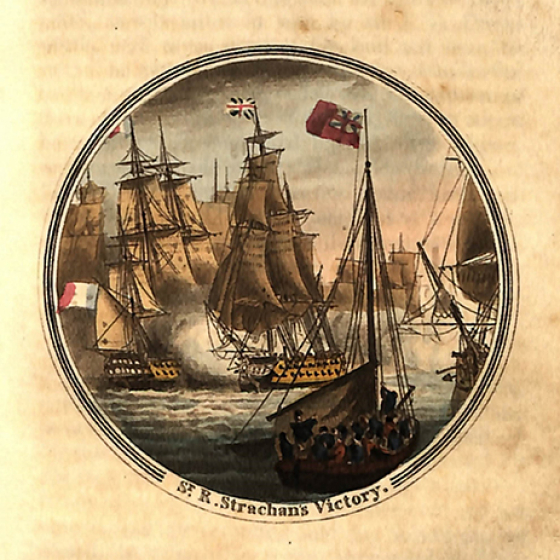 Jehoshaphat Aspin (d. 1853?) was a cartographer and historian whose works were published by Samuel Leigh and other London publishers in the first half of the 19th century.

This pocket-sized account of the ‘splendid achievements’ of the reign of George III, contains 33 small hand-coloured aquatints engraved by Scotsman John Heaviside Clark (c. 1771-1863), nicknamed ‘Waterloo Clark’ for the illustrations he made in the field after the famous battle.

The delightful circular scenes animate some of the principal episodes from George’s rule, creating the impression of viewing the events at distance as if through a telescope.  This illustration portrays the moment of capture of four escaped French ships off the Spanish coast of Ferrol in November 1805 during the Battle of Trafalgar, in a victory commanded by Colonel Richard Strachan for which he was knighted soon after.

You can search for and make an appointment to view this and other rare books via the UNSW Canberra Search Gateway.