You will think of me sometimes dear 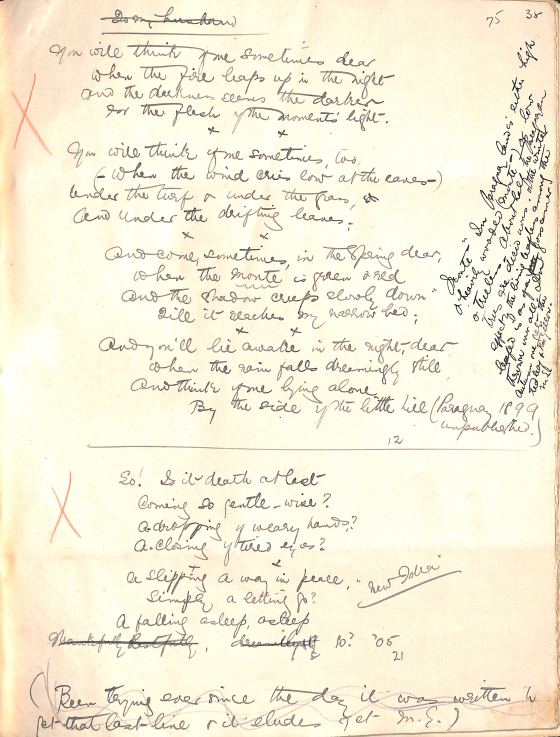 Mary Gilmore’s vigorous life of 97 years was notable for its many achievements and interconnections, and is recognised today by her enduring presence on the Australian 10-dollar note.  Gilmore produced an extensive corpus of lyric poetry, and she was a teacher and labour movement activist, a contributor to The Bulletin and women’s columnist for the Sydney Worker. She maintained close friendships with leading literary figures (Henry Lawson, Hugh McCrae, John Le Gay Brereton and others) and was the first Australian writer to be made a Commander of the Order of the British Empire for services to literature.

One of Gilmore’s more remarkable associations was as an acolyte of utopian William Lane (1861-1917), founder of the New Australia colony in Paraguay, whose cause she followed to South America in 1895.  There she met and married Victorian shearer William Gilmore (1866-1945), another member of Lane’s settlement at Cosme, in May 1897.

This handwritten love poem is one in a sequence of early manuscripts held in Mary Gilmore’s papers at MSS 62.  Penned in Paraguay in 1899, probably in August or September after Mary, her husband and son (also William, 1898-1945) had recently quit the utopian community.  Originally titled ‘To My Husband’ the poem was later published as ‘You Will Think of Me Sometimes, Dear’, in Gilmore’s first anthology Marri’d, and Other Verses (Melbourne: George Robertson & Co., 1910).

The poem is both a reflection on her absent husband (and forced separation when he travelled to find work), and a meditation on the beauty of the forest landscape near their former home.  In a handwritten note scrawled next to the poem Gilmore observes:

‘Monté in Paraguay land is either high & heavily wooded (monté) or low & treeless.  About half the Paraguayan trees are deciduous.  The winter effect of the living leafless among the leafed is as if a gossamer thrown over all.  In autumn one gets the red leaf & now yellow veil.’

You can search for and make an appointment to view this and other Special Collections rare publications via the UNSW Canberra Search Gateway.