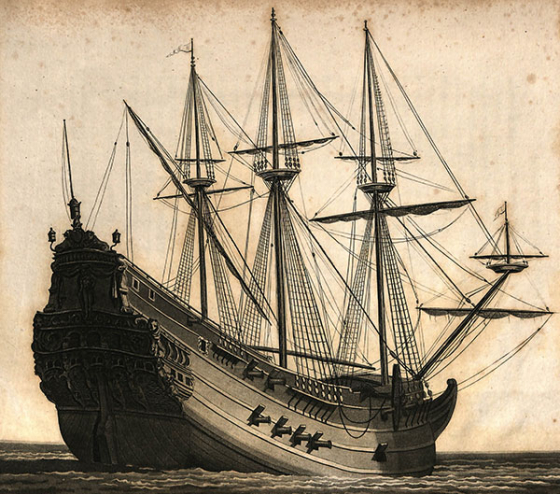 John Charnock (1756-1807) sailor and writer, enlisted with the Royal Navy as a volunteer after studying at Oxford, and began pursuing his specific interest in naval history and affairs whilst at sea.  After retiring from his unpaid commission, Charnock became known for several authoritative works on Royal Naval figures (including Horatio Nelson), and for this comprehensive three-volume history of naval design with splendid fold-out engravings.

In the mid-16th century the Genoese Republic (which was in intense political and commercial competition with Portugal) constructed several carracks for use in its navy, such as the one depicted in this late 18th-early 19th century engraving.  A precursor to the 16th-17th century galleon, the carrack had evolved as the principal trade vessel in the 14th-15th centuries, and was particularly favoured by the Portuguese.  The ship’s innovative design with a pronounced rounded stern, improved rigging and superior carrying capacity rendered it suitable for navigating turbulent seas, and for storing ample goods and provisions on long voyages of commerce and discovery.

You can search for and make an appointment to view this and other Special Collections rare publications via the UNSW Canberra Search Gateway.