School of Humanities and Social Sciences 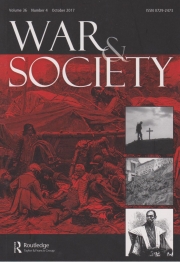 Established in 1983, War & Society publishes high-quality scholarly articles on the causes, experience and impact of war. Our articles feature original research based on archival, oral, and other primary sources.

While we publish articles dealing with the technical and operational aspects of warfare, our main emphasis is on the broader relationships between warfare and society. Our articles range in time from Ancient Greece to the 21st Century, and highlight the diverse aspects of national and transnational operational and social military history. We also welcome articles which reflect recent historical ‘turns’ such as memory studies, cultural history, and the history of emotions. War & Society does not review books.

War & Society is an international, peer reviewed journal which is published by Taylor & Francis on behalf of the School of Humanities and Social Sciences, UNSW Canberra.

Why submit to War & Society?

Mesut Uyar and & Serhat Güvenç, ‘A tale of two military missions: The Germans in the Ottoman Empire and the Americans in the Republic of Turkey’

Christopher Thomas Goodwin, ‘Surviving Crises: The Napoleonic Upheavals and the “Time of the French” as Cultural Trauma in Prussia, 1806–1812’

Sarah-Jane Walton, ‘“the Soul of the City”? Sound Performances and Community in Cape Town’s Two Minutes of Silence During the First World War’

Foster Chamberlin, ‘The Roots of the July 1936 Coup: The Rebirth of Military Interventionism in the Spanish Infantry Academy, 1893–1927’

Jasmine Wood, ‘“Lashings of Grog and Girls”: Masculinity and Sexuality in the Rehabilitation of Facially Disfigured Servicemen in the Second World War’

S.P. Mackenzie, ‘Per Ardua: Achievements, issues, and opportunities in writing the history of the Royal Air Force’

Our wide-ranging articles include:

- Bernd Hüppauf, ‘Langemarck, Verdun and the Myth of a New Man in Germany after the First World War’

- Kisho Tsuchiya, ‘Indigenization of the Pacific War in Timor Island: A Multi-language Study of its Contexts and Impact’

- Alastair Noble, ‘A Most Distant Target: The Bombing of Königsberg, August 1944’

-J.Y. Wong, ‘The Limits of Naval Power: British Gunboat Diplomacy in China from the Nemesis to the Amethyst, 1839–1949’

- Karen Jones, ‘The story of Comanche: horsepower, heroism and the conquest of the American West’

- Robert Niebuhr, ‘The Road to the Chaco War: Bolivia’s Modernisation in the 1920s’

- Jacqueline de Vries, ‘Cameroonian Schutztruppe Soldiers in Spanish-Ruled Fernando Po during the First World War: A ‘Menace to the Peace’?’

- Van Nguyen-Marshall, ‘Appeasing the Spirits Along the ‘Highway of Horror’: Civic Life in Wartime Republic of Vietnam’

- Kumar Ramakrishna, ‘Anatomy of a Collapse: Explaining the Malayan Communist Mass Surrenders of 1958’

- Adam Dighton, ‘Race, Masculinity and Imperialism: The British Officer and the Egyptian Army (1882–1899)’

- Jutta Schwarzkopf, ‘Combatant or Non-Combatant? The Ambiguous Status of Women in British Anti-Aircraft Batteries during the Second World War’

- Vesna Drapac, ‘The Memory of War and the History of the First Yugoslavia’

- Helen B. McCartney, ‘Commemorating the centenary of the Battle of the Somme in Britain’

For more information, please email the editor at warsoc@adfa.edu.au

Full details regarding published articles, aims and scope of journal, and instructions for authors (including how to submit) can be found at: https://www.tandfonline.com/loi/ywar20