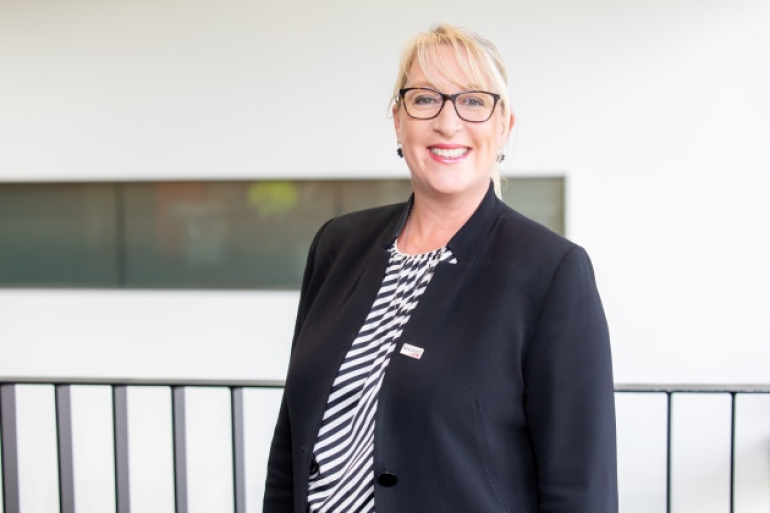 UNSW Canberra graduate, Gabby Costigan MBE has been named a recipient of a 2022 UNSW Alumni Award.

Gabby received the Professional Achievement Award and is among seven other UNSW alumni recognised for their professional and personal dedication to making a profound impact here and around the globe.

“I hope through this award I can continue to be a role model certainly for young women but for all students that are interested in studying STEM,” Gabby said.

Gabby is Group Managing Director, Business Development for BAE Systems., and a passionate advocate for championing women in defence and women in STEM across Australia.

After graduating with a degree in Aeronautical Engineering at UNSW Canberra Gabby joined the Australian Army, eventually retiring as a Colonel after a distinguished career that included operational experience commanding logistic operations for both Australian and US deployed military forces.

Gabby has been honoured for her military service by the Australian and US Governments and NATO and was awarded a Most Excellent Order of the British Empire (MBE) for services to UK/Australia relations in 2019.

Gabby was previously the Chief Executive Officer of BAE Systems Australia, the largest defence and security company in Australia. In that time Gabby built the workforce from 3,000 to over 5,000 and expanded the company order book through winning key campaigns including upgrades to the Jindalee Over the Horizon Radar system, 9-ship Hunter Class Frigate Program and F-35 maintenance contract. Gabby was until recently Chair of the Council for Women and Families United by Defence Service. This forum provides women and families a direct connection into the Minister of Defence’s office to raise issues affecting defence members and their families.

Prior to joining BAE Systems Gabby was CEO for Linfox International Group, where she focused on transforming the business with an emphasis on strong customer service and the highest standards in safety and integrity across the region.

Following nomination by the Prime Minister, Gabby represents the economy as one of two Australian members of the Asia Pacific Economic Cooperation Business Advisory Committee (ABAC). Gabby is responsible for supporting and promoting Australian interests across the Asia Pacific region, with particular focus on STEM and women in business.