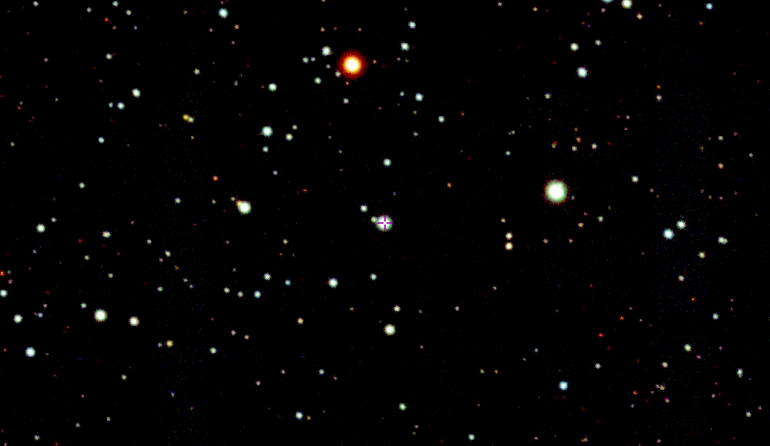 A massive explosion from a previously unknown source – 10 times more energetic than a supernova – could be the answer to a 13-billion-year-old Milky Way mystery.

An international team of astronomers, including UNSW Canberra’s Dr Simon Murphy, have potentially discovered the first evidence of the destruction of a collapsed rapidly spinning star – a phenomenon they describe as a ‘magneto-rotational hypernova’.

The previously unknown type of cataclysm – which occurred barely a billion years after the Big Bang – is the most likely explanation for the presence of unusually high amounts of some elements detected in another extremely ancient and ‘primitive’ Milky Way star.

This star, known as SMSS J200322.54-114203.3, contains larger amounts of metal elements, including zinc, uranium, europium and possibly gold, than others of the same age.

Neutron star mergers – the accepted sources of the material needed to forge them – are not enough to explain their presence.

The astronomers calculate that only the violent collapse of a very early star – amplified by rapid rotation and the presence of a strong magnetic field – can account for the additional neutrons required.

“The ‘chemical fingerprint’ of a star can tell us much about its age and the environment into which it was born,” Dr Murphy said.

“The lack of heavy elements in its atmosphere tells us that this star is very old. However, it is oddly abundant in certain heavy elements such as zinc, uranium and europium.

“This fingerprint is a sign that it was created from gas enriched by the explosion of a very massive, highly-magnetised and fast-rotating star, more powerful than a supernova, a so-called ‘magneto-rotational hypernova’. This is the first time we have seen the chemical fingerprint of such a hypernova explosion and will hopefully prompt new theoretical work to understand these powerful but enigmatic objects.”

The research was published today in Nature. It was led by David Yong, Gary Da Costa and Chiaki Kobayashi from Australia’s ARC Centre of Excellence in All Sky Astrophysics in 3 Dimensions (ASTRO 3D) based at the Australian National University.

“The star we’re looking at has an iron-to-hydrogen ratio about 3000 times lower than the Sun – which means it is a very rare: what we call an extremely metal-poor star,” Dr Yong said.

“However, the fact that it contains much larger than expected amounts of some heavier elements means that it is even rarer – a real needle in a haystack.”

The first stars in the universe were made almost entirely of hydrogen and helium. At length, they collapsed and exploded, turning into neutron stars or black holes, producing heavier elements which became incorporated in tiny amounts into the next generation of stars – the oldest still in existence.

Rates and energies of these star deaths have become well known in recent years, so the amount of heavy elements they produce is well calculated. For SMSS J200322.54-114203.3, the sums just don’t add up.

“The extra amounts of these elements had to come from somewhere,” Associate Professor Chiaki Kobayashi said.

“We now find the observational evidence for the first time directly indicating that there was a different kind of hypernova producing all stable elements in the periodic table at once – a core-collapse explosion of a fast-spinning strongly-magnetised massive star. It is the only thing that explains the results.”

Hypernovae have been known since the late 1990s. However, this is the first time one combining both rapid rotation and strong magnetism has been detected.

“It’s an explosive death for the star,” said Dr Yong. “We calculate that 13 billion-years ago J200322.54-114203.3 formed out of a chemical soup that contained the remains of this type of hypernova. No one’s ever found this phenomenon before.”

The star lies 7500 light-years from the sun, and orbits in the halo of the Milky Way.

Dr Murphy was one in a team of astronomers using the ANU 2.3-metre telescope near Coonabarabran to observe hundreds of potentially metal-deficient stars that were identified by the SkyMapper telescope’s Southern Sky Survey.

“Over many nights our job was to separate the wheat from the chaff and find interesting stars which are so lacking in elements heavier than hydrogen or helium that they were formed very early in the Galaxy’s history,” Dr Murphy said.

Dr Murphy said the project had a different focus than his current work at UNSW Canberra.

“Ironically, my work in the School of Science is focused not on the oldest stars in the Galaxy, but some of the youngest and closest to the Earth,” Dr Murphy said.

“However, these young stars are the chemical beneficiaries of the many supernovae and hypernovae which have exploded since the Big Bang, gradually enriching primordial gas clouds with the elements necessary to form planets and sustain life.”

Other members of the research team are based at the Massachusetts Institute of Technology in the US, Stockholm University in Sweden, the Max Planck Institute for Astrophysics in Germany, and Italy’s Istituto Nazionale di Astrofisica.

A version of this article was originally published by Science in Public.

Image: The star SMSS J200322.54-114203.3. (centre, with crosshairs) in the south-eastern corner of the constellation Aquila (the Eagle) close to the border with Capricornus and Sagittarius. Credit: Da Costa/SkyMapper