The United Nations Office on Drugs and Crime has recently identified the Pacific as a transit point for drug trafficking routes. It stated that the ‘drug situation in the Asia Pacific has both evolved and deteriorated in recent years despite cross-border travel restrictions and lockdowns put in-place during the pandemic’. Drug trafficking poses significant challenges to global security. 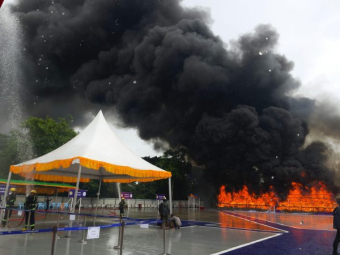 The level of organisation that enables these crimes to take place has a conspicuous transnational dimension that draws on the resources of a range of actors operating across vast geographical areas. Cooperation — rather than competition — has allowed these actors to form fluid networks that facilitate the movement of drugs to and from black markets around the world. In February 2022, the Lowy Institute described the Pacific as a ‘drug highway’ that provides infrastructure for the production, trafficking and transhipment of methamphetamine, heroin and cocaine.

Australian and New Zealand outlaw motorcycle groups have established a presence in countries such as the Cook Islands and Fiji. This has been attributed to an increase in criminal activity in the area. Collusion between resident groups and transnational organised crime groups from Asia and Latin America facilitate on-site drug production capabilities across the Pacific Islands. But these issues do not present new challenges to regional security. Rather, they are the augmentation of existing problems arising from shifts in the illicit markets operating throughout the Pacific.

In October 2022, the Heads of National Drug Law Enforcement Agencies of Asia and the Pacific met in Bangkok to assess drug-related issues impacting the region. The discussions focussed on the activities of sophisticated criminal networks based in the ‘Golden Triangle’ (where the borders of Thailand, Laos and Myanmar meet) and their ability to traffic increasing quantities of methamphetamine and ketamine.

The enormous growth of methamphetamine production in Myanmar was also identified as a key challenge confronting policymakers and law enforcement agencies. But the threats presented by these developments in Southeast Asia do not account for all the growing problems facing nations in the Pacific. Looking at Latin America is useful to better understand the scope and complexity of these problems.

Historically, cocaine has been the drug most associated with Latin American cartels — due to its almost exclusive cultivation in the Andean region of South America. But over the past decade, the illicit drug markets in Latin America have changed.

There have been innovations in processing techniques and domestic and international partnerships between different organised crime groups in Latin America and Europe have improved. Coca cultivation and cocaine production has also increased. In 2019, after almost two decades of foreign aid packages aimed to support counter-narcotics initiatives in the region, cocaine production was at its peak.

But this is only one part of the story. Latin American organised crime groups have expanded their business models to prioritise producing and trafficking synthetic drugs such as methamphetamine and fentanyl. Mexican drug cartels are prime actors in this move towards the mass production and distribution of such synthetics. Their production has evolved into such a sophisticated operation that the supply now outstrips the demand from traditional markets in the United States and Europe.

For some time now, cartels have actively procured the resources and skill sets of a range of criminal groups that transverse the Pacific. The use of brokers has enabled geographically disparate organised crime groups to create enduring connections that have radically changed the way these illicit businesses operate. For example, the meteoric rise of Mexico’s Jalisco New Generation Cartel is the result of its ability to maintain access to precursor chemicals from China through its territorial control of vital maritime infrastructure including Mexico’s largest port.

The impact of these changes is being felt in countries such as Australia and New Zealand. In 2019, multinational and multiagency cooperation between Australia, the United States and Mexico led to a series of mega-seizures of crystal methamphetamine. These seizures have continued, and in 2022 the largest seizure of fentanyl was made by Australian authorities.

There are no clear or easy solutions to these problems., They are shared problems that require shared solutions. Small island nations in the Pacific will always be vulnerable to infiltration by well-funded and organised transnational crime groups.

The Transnational, Serious and Organised Crime Pacific Taskforce and the Pacific Transnational Crime Network act as crucial scaffolding to support intelligence sharing amongst their membership and regional counterparts. But these problems will not be solved through a purely localised approach. Greater resilience is needed — not just for these Pacific Island states — but for all states in the region.

Intelligence gathering and sharing will be key to mitigating the current threats posed by illicit activities in the region. A pragmatic approach, supported by creative diplomacy is required — even in circumstances where diplomatic relations become strained. For example, despite ongoing political differences between Australia and Myanmar, Australia continues to share intelligence, albeit in a very restricted manner, between the Australian Federal Police and the Myanmar National Police.

These types of policy choices underscore the value of intelligence sharing in regional and global efforts to counter drug trafficking and other illicit activities. The volume of drugs entering Australia is a significant national security issue and ‘intelligence is critical’ to the development of all future policy and law enforcement responses.

Anthea McCarthy-Jones is a Senior Lecturer in the School of Business at the University of New South Wales, Canberra.

This article is republished from the East Asia Forum under a Creative Commons license. Read the original article.